NEXT FOR THE USECONOMY IS AN INFLATIONARY DEPRESSION. THE DEEP RECESSION WILL WORSEN. THE PRICE INFLATION WILL COME FROM QE2.  THE BOND CRISIS WILL SOON EXPLODE IN FINANCIAL MARKETS. POLITICAL SHOCK IS ASSURED, BUT ITS FACE IS UNCERTAIN.

HIGHER CRUDE OIL & FOOD COSTS WILL RAISE DANGEROUSLY THE COST STRUCTURE OF THE ENTIRE USECONOMY. FURTHERMORE, ANY RISE IN THE CHINESE YUAN CURRENCY EXCHANGE RATE WILL RESULT IN HIGHER CONSUMER PRICES IN A WIDE RANGE FROM ELECTRONICS TO HOUSEWARES. BY LATE 2011 OR EARLY 2012 THE HORRENDOUS STAGFLATION WILL BE RECOGNIZED IN FULL BLOOM, BUT IT WILL BE TOO LATE.

In my view, the achieved $1400 gold price goal will not raise alarm. However, the $100 crude oil will surely ring loud alarm bells, especially if the gasoline price makes a big jump by the next summer driving season.

It bears repeating: The big curve ball upcoming by spring or summer 2011 will be that price inflation will be called growth, even while job losses continue. Only when unemployment moves higher still, will the wake-up call be heard on the dangerous price inflation realized. When the contradiction in continued or worsened unemployment arrives, the public will see the growth as a mirage, or an affixed billboard from the propaganda machine. My belief is that by the end of 2011 or early 2012, the public will awaken to the reality of worse economic recession but with accompanied heavy price inflation. STAGFLATION WILL ARRIVE EARLY IN 2011 AND DELIVER A NASTY TOLL. It is already here, but will grow worse. By the end of 2011, it will be too late to fix anything. Systemic failure will have gathered far too much destructive momentum.

WELLS FARGO HAS BEGUN TO IMPLODE. WHETHER ILLIQUID INSOLVENCY OR MECHANICAL BREAKDOWN DUE TO LACK OF FUNDS, THE BANK HAS BEGUN TO LIMIT WITHDRAWALS. A BANK RUN IS NEXT. ITS PROXIMAL CAUSE FOR RUIN STEMS FROM MORTGAGE LOSSES IN GENERAL. THE BIG USBANKS HAVE BEGUN TO SHOW DEATH SYMPTOMS. LACK OF CASH IN A.T.M. MACHINES IS ONE WARNING OF A BADLY DISRUPTED SUPPLY CHAIN, WARNED BY THE JACKASS. IT HAS BEGUN, LEADING TO A BANK HOLIDAY.

The problems are not just with Wells Fargo, but also JPMorgan Chase and Bank of America customers limited on withdrawing cash. The rumor of a bank holiday across Twitter and other internet forums has caused early action toward bank runs. Numerous ATMs across the country have crashed over the previous weekend (November 6th & 7th), preventing customers from performing basic transactions.

If not in November, they will come perhaps before Feburary 2011, my late date limit forecast.

A DOMINO EFFECT OF BIG USBANK BREAKDOWN IS READY TO BE REVEALED. ONE BIG USBANK FAILURE EVENT WILL BRING DOWN THE PACK OF CARTEL ZOMBIES. THEY SHARE A FATE FROM DIVERSE RUINOUS CONNECTIVE TISSUE IN SIMILAR BALANCE SHEETS AND COMMITMENTS.

Many investors wonder which big US bank will fall first, or show great distress next. It does not matter. Whenever one wobbles badly and noticeably, whether Bank of America or Wells Fargo or Citigroup, the rest as a group will wobble equally and with the same effect. The inescapable outcome will be a temporary shutdown of the US banking industry.

BEWARE OF THE BIG BANK DEATH SPIRAL. DEEP LOSSES LEAVE THEM VULNERABLE TO INTERNAL SEIZURES DUE TO ILLIQUIDITY. THE EXTERNAL THREAT IS FROM CONTINUED LOAN DEFAULTS, COMPOUNDED BY CIVIL DISOBEDIENCE.

Expect similar stories in the next couple weeks for Wells Fargo, Bank of America, Citibank, JPMorgan, and HSBC. What the big US banks all have in common is mortgage putbacks, foreclosure fraud, lawsuits, and growing civil disobedience from homeowners refusing to pay monthly payments.

THE 2ND MORTGAGE LIEN THREAT IS ANOTHER $450 BILLION MONSTER. WORSE, IT FORMS A GRAND OBSTACLE IN THE FORECLOSURE PROCESS. BANKS REFUSE TO TAKE TOTAL LOSSES ON SECONDS. SO THE LOGJAM OF DEFAULTED AND FORECLOSED HOMES PILES UP IN INVENTORY. AN OMNIBUS BAILOUT PLAN WILL BE DISCUSSED SOON, LIKE A MARSHALL PLAN. THE HOUSING MARKET IS TOTALLY DESTROYED.

The big bank exposure on second mortgages and home equity loans is sufficient to wipe out over half of the entire bank equity. Bear in mind that the big banks are insolvent with negative valued balance sheets in the world of reality beyond FASB niceties. Wells Fargo has more second lien exposure than any other big bank, relative to their equity valuation (total stock market cap value). They must resolve the conflict, since the bank is dead two times over. They must admit the second liens are worthless, but they refuse to do so. Fantasy wafts like fairies, as banks cite 5% delinquency on second lien home loans, when in almost every case, the lien is worthless. See the Big Four exposure on second liens, in which Citibank has much less than Bank of America, Wells Fargo, or JPMorgan. Some mid-tier banks are dead on arrival. 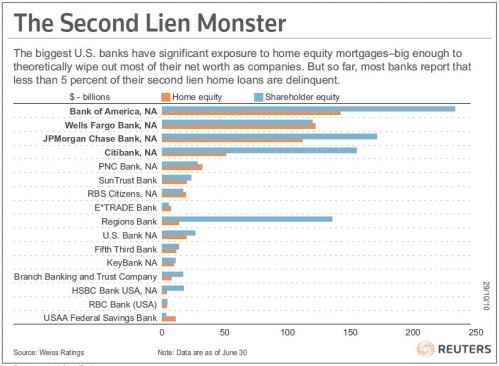 JS Kim of SmartKnowledge Pte Ltd surmised in May 2010 about the impact of price suppression. He wrote, „If US regulators stepped in and said Goldman Sachs, HSBC, and JPMorgan could not participate in the gold and silver futures market for three weeks, I really think you would see the gold and silver price more than double in that time.“

NINE BASIC REASONS WHY GOLD WILL CONTINUE ITS POWERFUL BULL RUN. INSOLVENCY AND DIVERSIFICATION OF RESERVES DOMINATE THE MOTIVES, AS SENTIMENT HAS CHANGED AND HOSTILITY IS EVERPRESENT AMONG FOREIGN ENTITIES.

Dundee Wealth Economics offered justification why the gold bull market will continue, along with the continued powerful short cover squeeze at the London LBMA metals exchange. A deadly gold & silver short covering death spiral is in progress. It might be taking a brief vacation for a few days to recharge and reload. Canadian money manager Dundee Wealth lists nine detailed reasons why the bull market in gold will continue with gusto.

2) Global imbalances: the USDollar must decline.

6) Mine supply is flat: peak gold is here.

9) Geopolitical environment: positive since filled with crisis and conflict.

DE-REGULATION IN CHINA MIGHT PERMIT MUCH BRODER GOLD OWNERSHIP. THAT WOULD UNLEASH HUGE DEMAND AND PRESSURE THE ANGLO BANKERS. CHINESE DEMAND HAS BEEN STRONG FOR YEARS, SOON TO REACH A HIGHER GEAR. WITH DOMESTIC MINE OUTPUT NOT EXPECTED TO GROW MUCH NEXT YEAR, CHINA WILL TAP THE GLOBAL MARKET, PUSHING UP THE GOLD PRICE.

Deregulation is coming to China in the gold market. The nation has already been the site of tremendous private demand, whose volume easily offset European central bank sales. The Chinese gold demand in 2010 will be a consensus estimated 500 tonnes. It will rise by as much as 20% in the year 2011, enough to surpass India as the top consumer in the next three years. Demand is forecasted to rise to around 600 tonnes in 2011, according to a Reuters survey of five analysts. Recent Chinese Govt restrictions imposed on property investment and speculation in other markets has resulted in more money going into gold and jewelry, which seems a calculated policy by the crafty government officials in Beijing. Gold will not burn their citizens in a bubble bust. Jewelry demand has risen by an average of 7% annually in steady fashion. Investment demand for gold in China has surged by 60% in 2009 to 150 tonnes.

THE G.L.D. GOLD EXCHANGE TRADED FUND IS GRADUALLY BEING EXPOSED AS A COLOSSAL FRAUD. ITS NET ASSET VALUE FROM GOLD DEPOSITS STANDS AT A PALTRY 96.7 PER SHARE, BEHIND ON METAL INVENTORY PACE. THE LACK OF BUYING SINCE JUNE 2010 IS A SMOKING GUN OF ITS CORRUPT MANAGEMENT. THE H.S.B.C. PROTECTORS HAVE DECIDED TO DOUBLE THEIR PAID SALARY.

As is gradually becoming clear, the GLD fund is not about physical gold but rather control of the gold price from heavy leasing and midnight cooperation with the LBMA futures market. My theory is that GLD has continued its leasing of metal inventory, but now has resorted to stealing investor funds. They routinely turn around and supply gold bullion to the embattled LBMA to prevent defaults at the metals exchange. Recall that HSBC is one of the two banks recently charged with a class action lawsuit for precious metal price manipulation, including RICO racketeering charges. 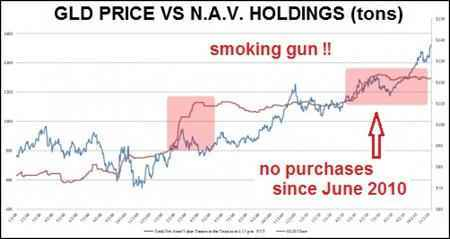 THE SPROTT SILVER FUND HAS LAUNCHED. THE FUND HAS BOUGHT 6.5 MOZ SILVER AT $25.82 PER OZ. THIS IS THE BEGINNING OF A JUGGERNAUT, AN HONEST PHYSICAL FUND. LEGITIMATE INVESTORS SHOULD HOPE THAT IT DRAINS INVESTOR FUNDS FROM THE CORRUPT S.L.V. FUND RUN BY JPMORGAN. IT WILL SURELY DIVERT THE SUPPLY CHAIN TO THE COMEX, SINCE MINING FIRMS WILL SUPPLY SPROTT DIRECTLY. SOME INITIAL BLOCKS APPEAR TO HAVE SPRUNG UP FOR ACCESS TO THE SHARES BY BROKERAGE HOUSES. GOLDMAN SACHS IS ACCUMULATING PHYSICAL SILVER!!

Asian buyers have been squeezing the shorts in the silver market, causing great pain as the silver price has risen 50% since late summer. After the drop in price from a brief $29 touch down to the low $25’s, the elastic physical market has responded with strong demand. Keep in mind that the paper silver market is the opposite, a key point. The bizarre anomalous inelastic paper market results in more selling when the price drops, the opposite to normal. So a collision is in progress, with grand fireworks behind the scenes, not visible to the public. The battle is on, where physical always wins if demand remains vigilant and purposeful. The physical players rush to respond to the generous discount that results from the bear raids and ambushes on the paper side. The paper players cannot produce enough silver after the raids push down the paper price in order to relieve their horrible short condition. By pushing down the paper price, they must bring to the table the discounted silver at the lower price. The paper market corrupt mavens are hastening their own death. A few more rounds and the COMEX and LBMA will be totally broken. Then comes a $50 silver price suddenly, followed by a $100 price within months.